What is ejaculation?
Ejaculation is the release of semen from the penis following sexual climax. When a man is sexually stimulated, the brain sends signals to the genital area through nerves in the spinal cord to make the pelvic muscles contract. At the start of this process, waves of muscle contractions transport the sperm, with a small amount of fluid, from the testes through to the vas deferens. The seminal vesicles and prostate gland add extra fluid to protect the sperm.
This mixture of fluid and sperm (semen) travels along the urethra to the tip of the penis where it is released (ejaculated) at the time of sexual climax (orgasm). 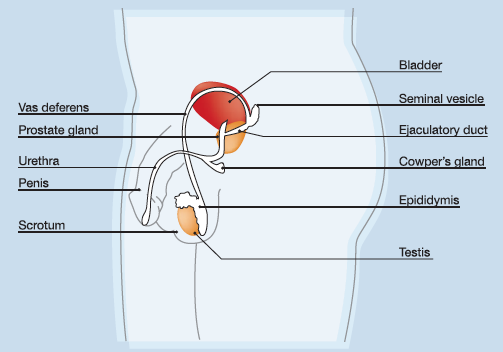 How soon is too soon when a man prematurely ejaculates?
For a heterosexual man, a commonly used definition of premature ejaculation is ejaculating before or within about one minute of his penis entering the woman’s vagina. However, there is no fixed time for ‘too soon.’ Premature ejaculation relates to the loss of control over ejaculation, and the distress it can cause to one or both partners, not the actual time it takes a man to ejaculate.

Lifelong premature ejaculation can be caused by a chemical imbalance in important brain centres, which may result in a lower ejaculatory threshold. As these men need less stimulation before they ejaculate, ejaculation can happen sooner than desired.
Psychological problems including performance anxiety may be secondary rather than being the primary cause. Anxiety is often the main cause of acquired premature ejaculation.
Performance anxiety can be because of anxiety about sexual performance, fear of being caught in a sexual act or anxiety related to a specific situation, such as a new relationship. Some religious beliefs may also make a man feel anxious about having sex.

Acquired premature ejaculation can also be caused by erectile problems. This may be because of the need for intense stimulation to get and maintain an erection or from anxiety about the difficulty in getting and keeping an erection.

What factors should be thought about when deciding on treatments?
Treatment for premature ejaculation should be based on the man’s relationship status and the cause of the condition (whether it is lifelong or acquired).
If a man is in a relationship, he should think about his own and his sexual partner’s needs when deciding which treatment option may work best.

Behavioural techniques
Semans’ “stop-start” technique involves the man telling his partner to stop stimulation when he feels he is close to ejaculation. When the feeling has passed, stimulation can be started again. These steps of stopping and starting can be repeated as needed.
Masters and Johnson’s “squeeze” technique can be used for delaying ejaculation. With this technique, the end of the penis is squeezed for several seconds just before ejaculation to lessen the urge to ejaculate. This is repeated a number of times until the man and his partner are ready for ejaculation to happen. This
technique can help teach a man  ejaculatory control.

Oral medication
Some antidepressants — tricyclic antidepressants and selective serotonin reuptake inhibitors (SSRIs) — have the side-effect of delayed ejaculation and are now commonly prescribed by doctors for premature ejaculation.
A tricyclic antidepressant has been shown to work better than SSRIs in some men. These drugs work only for as long as the man continues to take the medication. Taking SSRIs can have some side-effects such as decreased libido (sex drive), nausea, sweating, bowel disturbance and fatigue.


Management
What role do partners play in the treatment of premature ejaculation?
If a man is in a relationship, both the man and his sexual partner can be affected by premature ejaculation. Partners can give valuable support and help decide the best treatment option, and it is helpful to involve them when talking with your doctor.

Partners of men with premature ejaculation may find it difficult to deal with their partner’s anxiety, particularly if they do not feel comfortable speaking to others about their concerns.
Emotional responses to premature ejaculation are quite normal and discussing these feelings with a partner and/or doctor can help.

c/o Monash Institute of Medical Research Victoria Australia
Andrology Australia is an initiative funded by the Australian Government Department of Health and Ageing.
This information has been provided for educational purposes only. It is not intended to take the place of a clinical diagnosis or proper medical advice from a fully qualified health professional. Andrology Australia urges readers to seek the services of a qualified medical practitioner for any personal health concerns.
Online Test